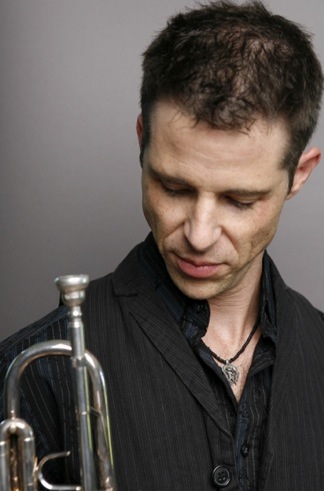 Eric “eO” Oberthaler is a S.F. Bay Area-based composer, director, producer, performer, teacher, graphic artist, and visionary thinker.  Having earned his B.M. at Oberlin Conservatory (1993) and M.F.A. at CalArts (1996) – both in music composition – he has since branched out into the worlds of multi-media, dance, circus, ritual theater, workshop leadership, and flash mob design, and has deepened his knowledge and skills in world music and digital audio production.  His music is immersive, his style kaleidoscopic, and his tastes broad – bridging the music of many cultures and blending many dualisms of our times: acoustic and electronic, analog and digital, organic and synthetic, life and art.

eO has played trumpet for the better part of the last decade in Bay Area powerhouse Brass Menazeri Balkan Brass Band, performs and produces for Middle Eastern ensemble Stellamara, and plays live solo with Sweet Can Circus.  He has appeared on numerous recordings, including Joanna Newsom’s Have One On Me and The Residents’ Nature Lover, and has recently released several recordings as a solo artist (available on his website, soundsliketree.com).  Over the past couple years he was awarded one of the top prizes in the Bob Moog Foundation’s OMG-1 Contest for his composition, Good Heavens, and received a 2011 Excellence In Sound Design award from the SF Theater Critics Circle for his work with Sweet Can Circus.  In 2009, eO’s work as director of world fusion ensemble Gamelan X came to the attention of TED Conference music director Thomas Dolby – who called his piece Spiral Flower  “one of the loveliest things I have ever heard.”  This discovery led to eO producing a collaboration with Philadelphia-based UV-light dance-theater troupe ArcheDream for Humankind that premiered on the main stage at the 2009 TED Conference in Long Beach, CA.