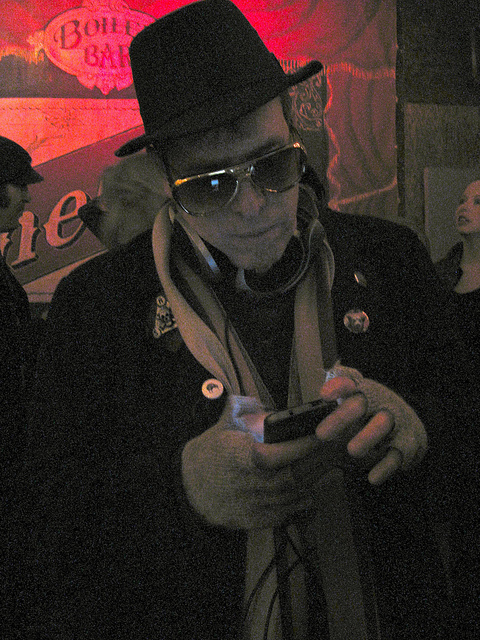 Mikl-Em is a writer, technologist, actor, and event producer in San Francisco. He has been active in the Bay Area arts, literature, and underground event scenes since moving here from Virginia in the 1990s. He also has a blog.

Much of his recent creative output has been on the theatrical stage or the written page, but Mikl is a poet first and foremost and is thrilled that the Decameron offers a chance to compose and perform new pieces for each of his four performances. His work is influenced by Beat poetry and harder-to-classify poets Paul Blackburn, Kenneth Patchen, Groucho Marx, and David Antin, numerous rappers, and by wanting to surprise you with something you don’t expect like the word VESTIBULE in all caps in the middle of a biographical note.

Mikl’s long association with The Dark Room Theater has included major roles in stage versions of Zippy the Pinhead, Young Frankenstein, Life of Brian, and last year’s sold out run of The Princess Bride: LIVE!, amongst others. He was a founding member of the award-winning Banana, Bag & Bodice ensemble. Mikl directed a portion of the All World’s Fair event earlier this year and is a co-producer with theatrical innovators Foul Play Productions. Other performance credits include Dadafest, Popcorn Anti-Theater, various San Francisco Fringe Fest shows, and MST3K-like comic riffing at Bad Movie Night.

Last century Mikl co-produced The Tentacle Sessions, a living artist salon, with LaughingSquid.com for whom he is a contributing writer-at-large. He also writes features and reviews in print for Hi Fructose, a delicious pop culture magazine.

Most recently Mikl has contributed to the new book Tales of the San Francisco Cacophony Society, under the nom de’ Cacophony “Michael McElligott”. In addition to these recollections of adventures with the Cacophony Society in the 1990s, Mikl-Em has been engineering a 2013 mini-revival of events in the classic Cacophony style.