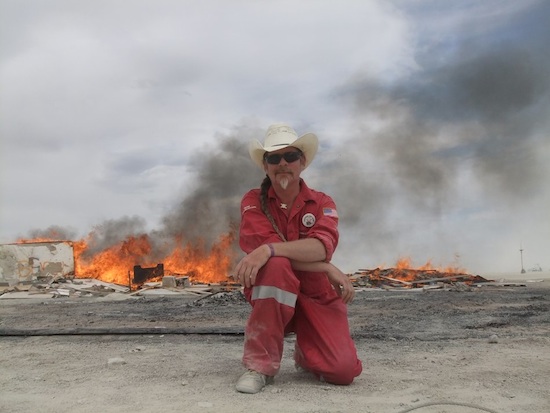 As a child Dave X sought out activities considered naughty by some including his parents. In doing so he noticed that through the organization of others he could achieve greater levels of naughtiness…

As he grew older Dave X was always looking behind the curtain to see who the wizard really was and how his mysterious machines worked. It was only natural that he would bring the traits of organization and mechanical curiosity together in his future work.

In 1992 he was lured to the Black Rock Desert when he discovered a strange group called The Cacophony Society. Wonders and curiosities were discovered as he crossed to a new reality and he knew he had seen the future. This future was made of wood and stood tall and proud on the desert floor before taking flight to the spirits in a blaze of fire. In 1999 after several years of creating large-scale fire installations he realized that the use of fire and fuel had grown to a tipping point. He saw that the time had come to either self regulate its use or face outside regulation.

Under the guidance of Crimson Rose he began his career with the Performance Safety Team and sought trainings and licensing so that he could create guidelines for the use of fire and fuels that would ensure the spectacle and ritual of their use while preventing their misuse. Dave X is now the Manager of the Fire Art Safety Team and holds several certifications for fuel management as well as being a licensed Pyrotechnic Operator.